It’s the eve of my baby’s first birthday. And I’m in full reflection mode. I’m remembering every step of the way, those final days and weeks in that spun-out timeless-feeling lead-up to her birth.

I read an article by a midwife named Jana Studska who uses a special name for this time: she calls it zwischen. I’m not sure how to pronounce it but she’s co-opted it from the German word for ‘between’ and I’m glad to see someone acknowledge this special time by giving it a name, any name. It’s a time when you know your baby is almost ready to come out now, but you’re at the mercy of the unknown. Even if for some reason you’ve been scheduled for a cesarean birth on a specific date, you still just don’t know for sure if there will be modifications to that date or time or if something else will happen, for example if baby and body have other ideas and birth – whether vaginal or cesarean – happens sooner than predicted or planned. Sometimes babies arrive even before we have a chance to get to the time of zwischen. I think the that’s the bottom line to the story to being a mother and to all of parenting: unpredictability.

Giving up on predictability was probably one of my biggest stumbling blocks to becoming a mother. Once upon a time I loved plans and routine and structure. I thought I’d have kids who would fit that mould. I thought they’d be mini-Adriennes!

They’re not. They like to challenge my preconceived notions of parenting at least once every half hour – always. The lessons of surrender that I learned in my first labour with my daughter Aoife ten years ago, I am still learning to apply to my everyday mothering these ten years on.

The point is, when it comes to having babies there is only so much that pregnant women and our maternity care teams can do to plan or predict birth. The rest is this glorious zwischen, or as I liked to see it, the waiting.

And even though the wait for my daughter Saoirse extended to the long haul of 42 weeks, I can tell you I truly didn’t mind. I’d found my pregnancy with her difficult: sickness and tiredness that went on longer than before. Discomfort and breathlessness in bed at night. Pubis symphysis dysfunction and a dodgy history of prolapse when my son was two (now aged seven) that made walking difficult and painful. I’m happy to tell you I used none other than yoga to deal with these pregnancy challenges and from about thirty weeks on I was strong and pain-free and suddenly embracing my pregnancy. The side-profile selfies with the bump sticking out started in earnest from then! I still found that sleep was disrupted but I knew how to make the most of rest and relaxation and at 40 weeks I felt better than I had at 20 weeks.

At 41 weeks I still felt good.

Rocking up to 42 weeks I was still on high levels of energy: all the better to climb that labour mountain, thank you very much.

I rested plenty but I seemed to want to use up my high levels of energy in some kind of weight training for the big event: you might know that intense nesting instinct that can take hold anywhere from 4 weeks to 42 weeks gestation. I found it expanded to the outside of my house, or should I say my “nest”, as much as the inside. My parents visited at 41 weeks (thinking they would surely be around until the birth) (they weren’t: I don’t think they liked zwischen very much PLUS I was having a homebirth which in their case made zwischen scary). They clucked and fussed at me sorting armloads of books, clearing off shelves, and -yes this is true – laying paving slabs to make a loose pathway outside my back door.

I’m not advocating for any 9-month-pregnant women to go lifting heavy stones at ALL: I am reflecting back on the strength that I had and the overwhelming need to move and to nest and above all, and I repeat it, the need to move at such an advanced stage of pregnancy. I know it was Katy Bowman who said it, in one of her podcasts – that pregnancy is a training sport for your most athletic endeavor ever: birth! This doesn’t mean any kind of extreme levels of strength training, I am sure, and I certainly don’t suggest it, but it does mean that physical exercise, along with plenty of appropriate rest aswell, and keeping moving right up till birth is at least a possibility and very likely important to prepare for the rather demanding superhuman effort of giving birth.

I look back on the photos of that time and they are so obviously a time of zwischen and waiting! I can tell that of everyone, I am the relaxed one (mostly). Though I remember that time of busy moving and doing – the nesting caught Colm too, who spent the final weeks painting radiators and walls – I recall I felt very serene, very timeless. Look at the photos of my family though: the faraway stares, the moon faces, the interminable waiting! I love looking at them so much!

The photos of faces that are WAITING! Just look at them in their enduring waitingness! 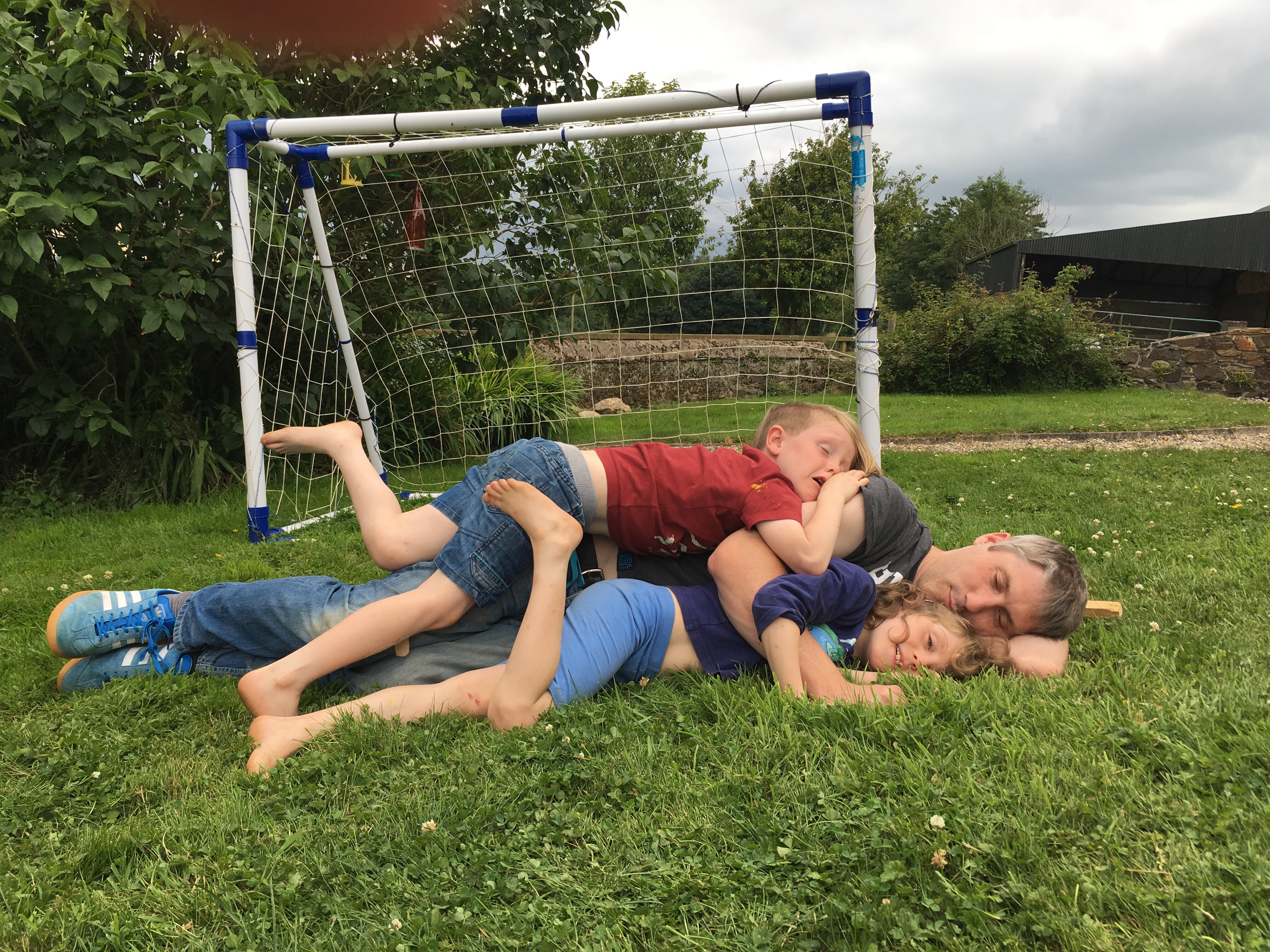 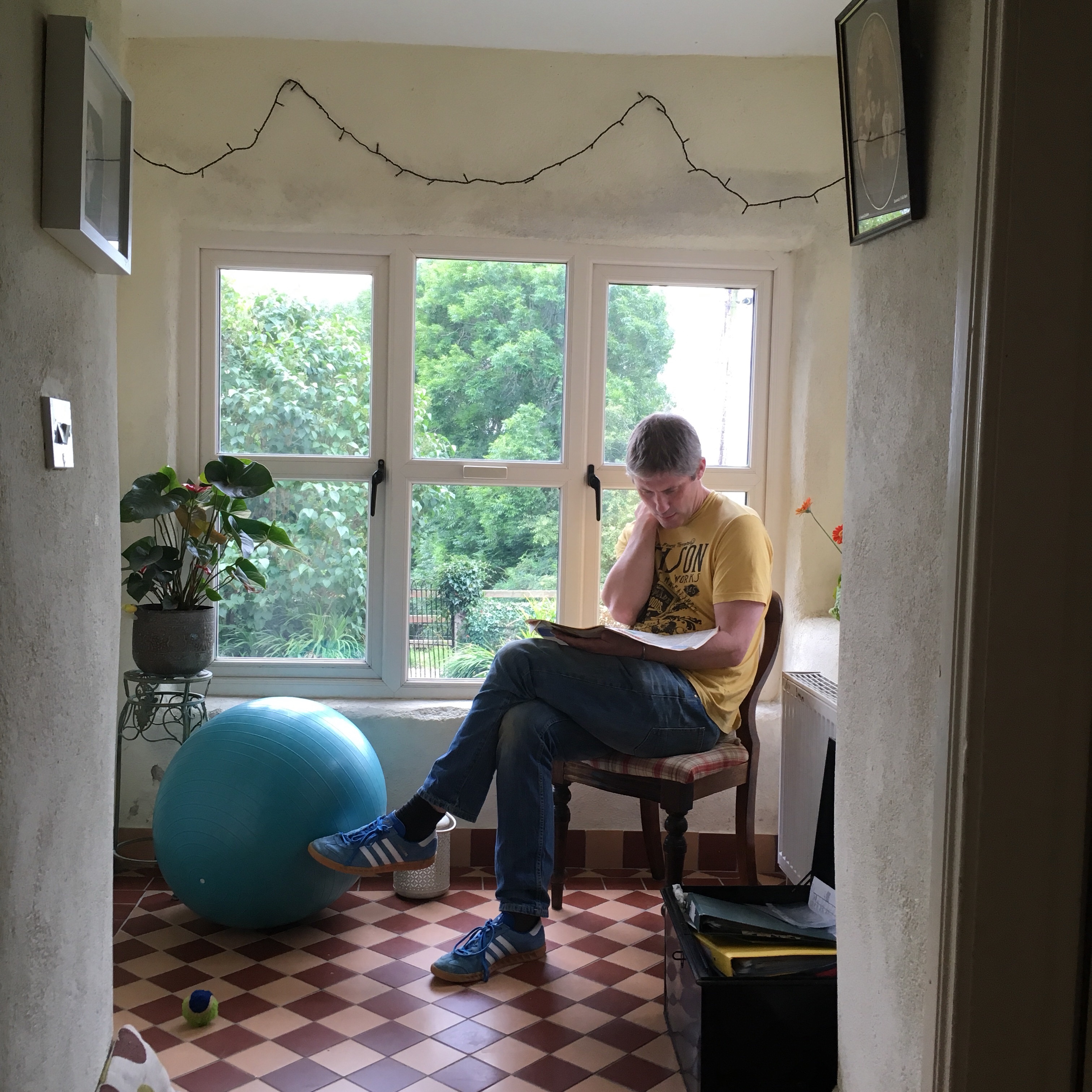 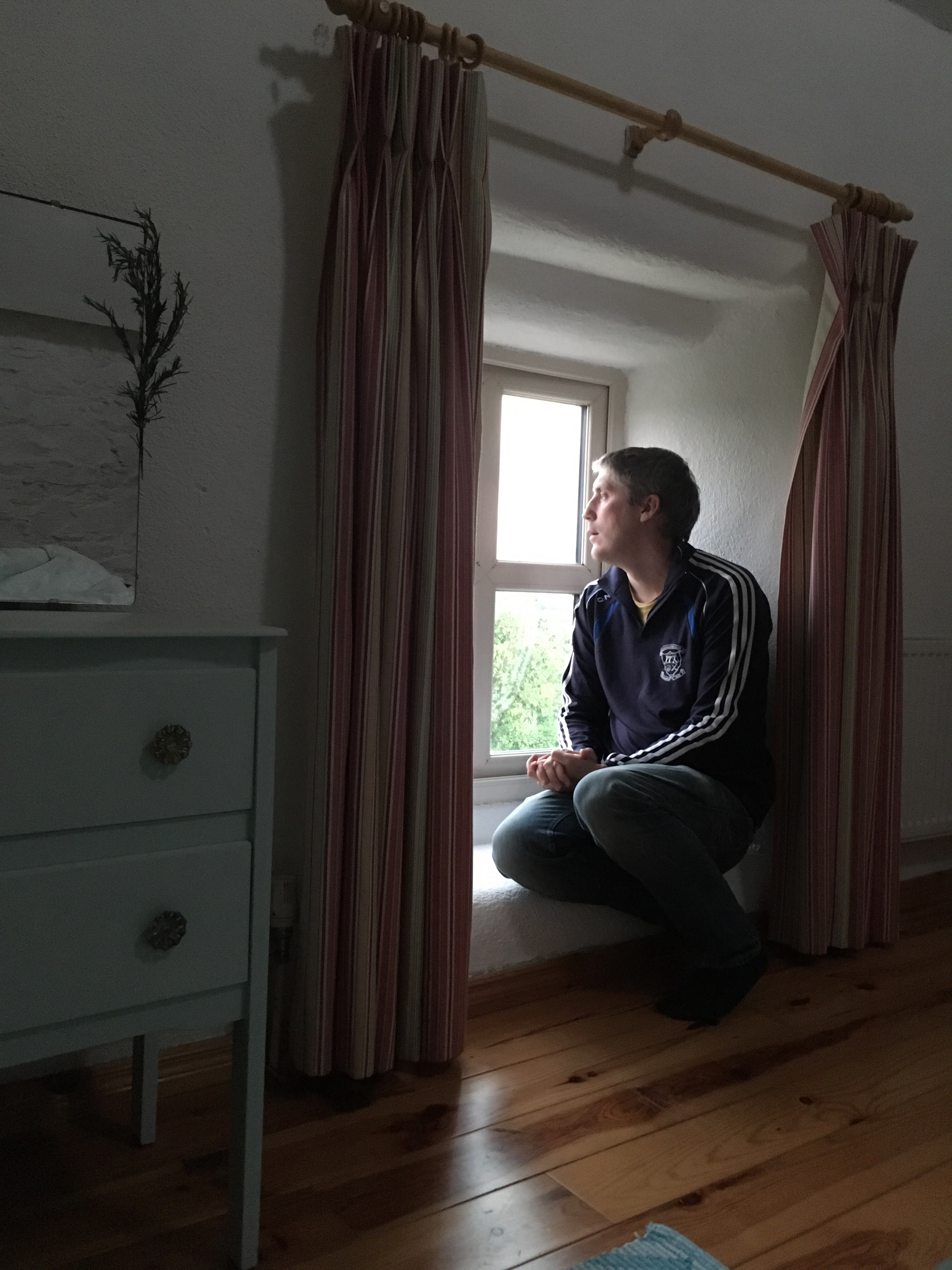 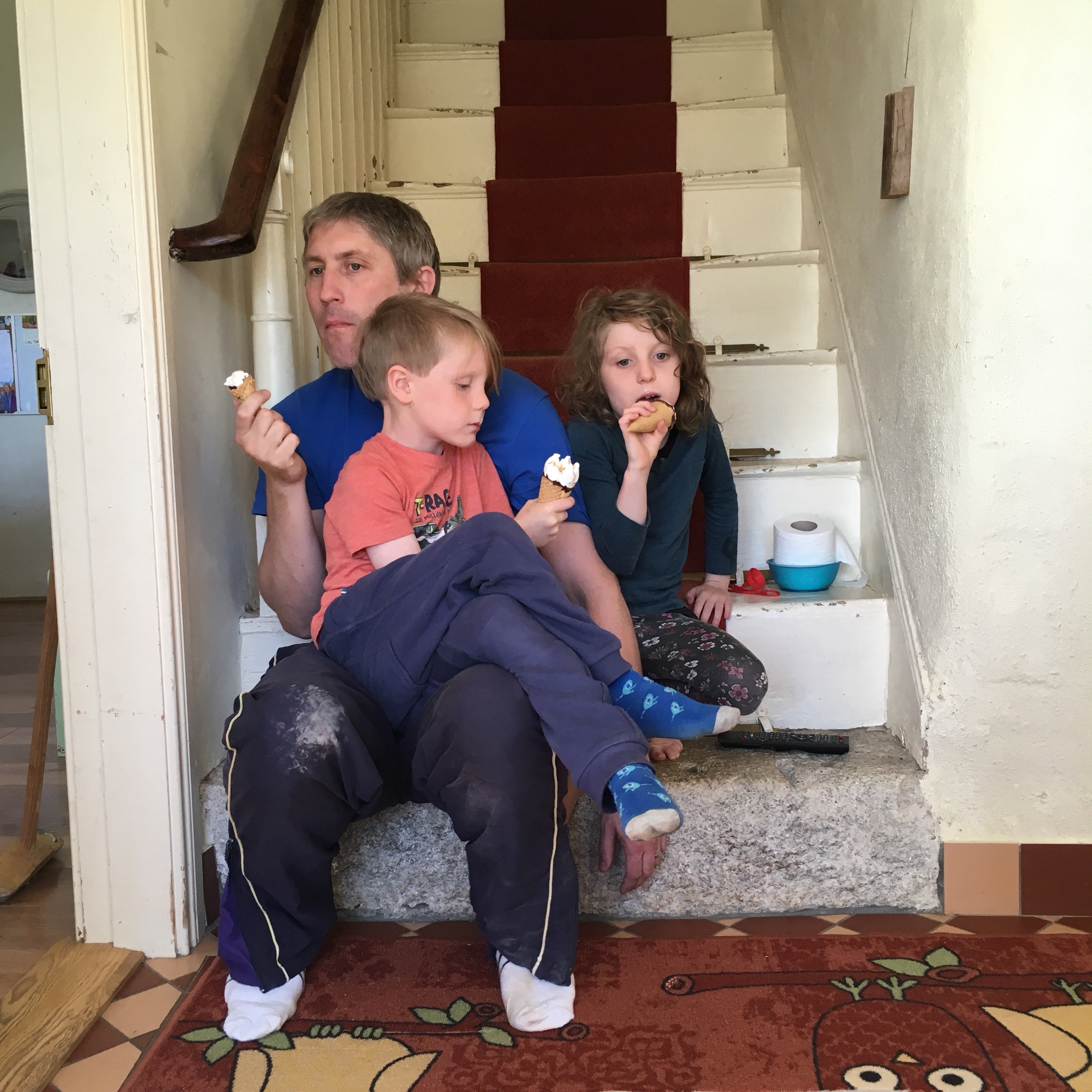 Here are my parents, my Dad using my birthing ball as a footrest. (I used it to sit on a lot in the evenings myself. It was sitting on it, with Colm brushing my hair, that I finally went into labour on the Wednesday evening, a year ago today, the eve of her birthday.) 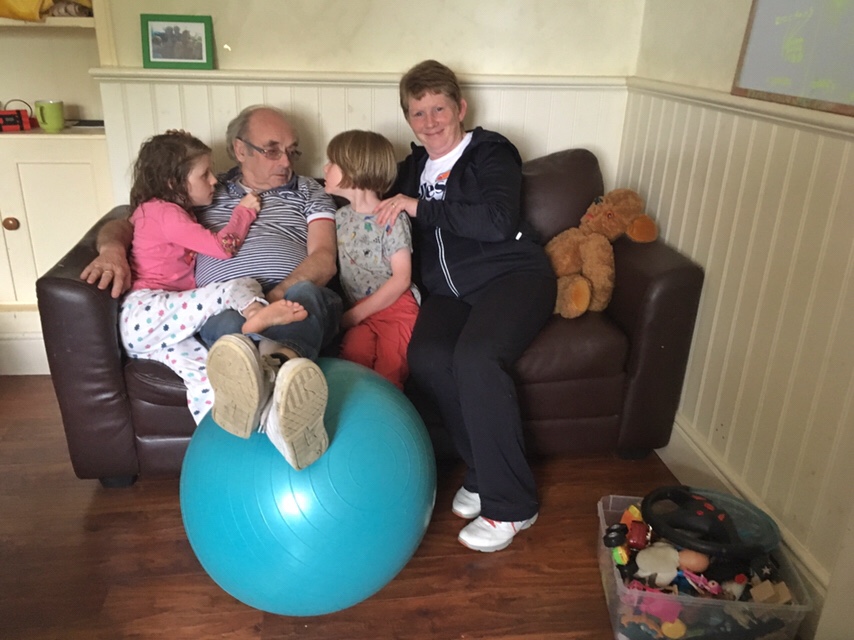 I did rest and reflect lots too, I took photos, I made art, I decorated my fabulous birth altar.

Looking back on some of these photos I can tell, I think, from the shape of my bump that my baby was still not lined up in her best “optimum” position for birthing: she simply wasn’t ready to come out yet. And I was totally ok with that. (I can also see the extent of my diastasis recti ever more obviously now. That would have impacted baby position and birthing ultimately somewhat. That’s a post for another day.) 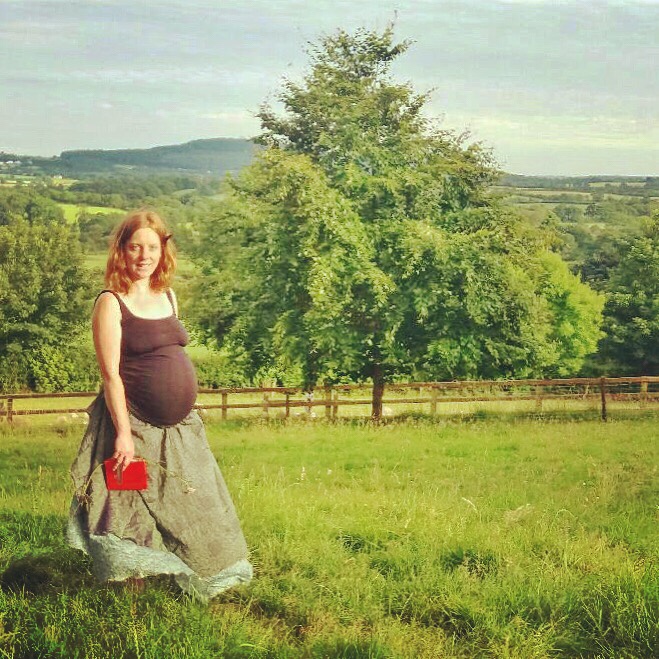 Unfortunately, the hospital and insurance policies of my birth team were not OK with that and the pressure from outside of my beautiful waiting bubble, to get this baby started, was leaden. My wonderful midwives of the local Domino scheme – we are so fortunate to have a local Domino scheme! – had so graciously and lovingly been on call for me since almost 38 weeks and in their devotion to me their hands were albeit tied about attending me at home at 42 weeks.

My midwives were able to tell I had plenty of waters: no worries there. And I, also, personally, instinctively and intuitively knew my baby was fine and I knew she would not benefit from being born a day or two earlier than my body was ready thanks to a hospital induction. I knew that a straightforward, hands-off and non-intervention birth would be better for her, and for me, at home, in the short run and in the long run.

Not that our hospital policies or our health system has a tradition of putting much or indeed ANY value on the personality, instincts or the intuition of the pregnant women, even if she conceived by herself (well, there was sex, but you know what I mean! By and large, many if not most women conceive by themselves, without medical assistance, through sex); even if she managed to be pregnant and grow a baby all by herself without much or any medical assistance; our bodies are collectively doubted when we get to an arbitrary gestation date depending on what county we are in; never mind that women might not know their exact dates and some maternity hospitals don’t even offer dating scans. Yet hospital “insurance policies” and other forces (the loom of the 8th Amendment for example) can decide an irrevocable “due date” for us, even if it’s sort of or totally made up.

Note: I shared my misgivings about being hurried up to give birth with some people, friends and close family:

“but the safety of the baby ….” they would typically start to interject.

“Yes,” I would interject back (whilst effectively biting their noses off). “Yes, I’m a pregnant woman who wants to make decisions in the interests of my baby.”

Doesn’t that sound crazy: to have to even say that? It’s not just the hospitals who distrust and infantilise pregnant women like at no other time in their lives. Society, culture, family and friends at large do it too. We’re used to fearing birth. Women who don’t fear birth and who trust themselves to like, just do it, and who can and and will and do, like my grandmother did, are called birthzillas these days I see. (I’m not even going to link to the recent Irish Times article that shared that term first. You can google it. It’s a horrible article.)

(Maybe you’ll notice in subsequent photos that my bump has changed shape and baby is getting into better position.) 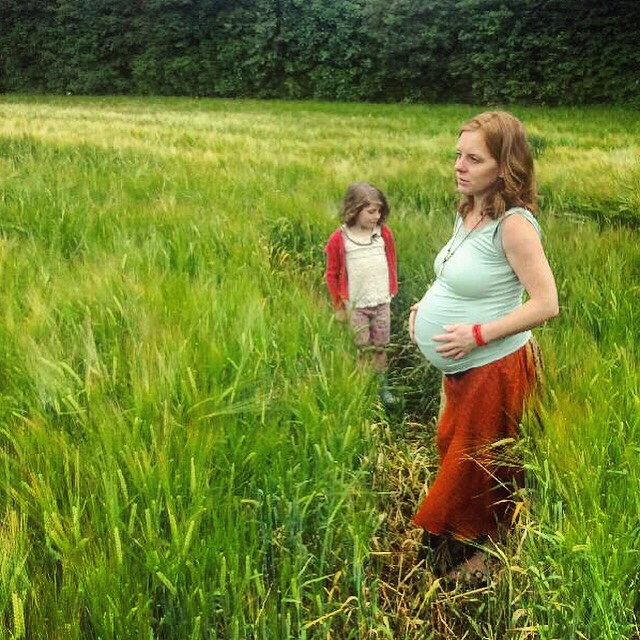 I confess that the cloud in my face in the photo above registers the resentment I felt, at about a week ‘overdue’ (do note the inverted commas), at being left with no choice but to undergo not one but two sweeps, and a two-hour-intensive accupuncture session – that I was actually very fortunate to avail of at very short notice. The cloud of maybe losing the care of dedicated midwives, and the threat of being induced when I did not want to be is the cloud that’s on my face in this photo.

The helplessness and the betrayal I felt, of a healthcare system that somehow stopped trusting me as a pregnant woman once I hit not even 42 weeks, but 41 weeks: in some counties I’d be considered lucky to have been “allowed” to go past 7 days, never mind ten days.

And in other countries, pregnancy and gestation is counted differently to how it’s counted here. We are trying to put linear and management-style controls and predictability on something as wild and inherently organic and unpredictable as birthing.

I’m the midst of my lovely waiting, I also felt tied, I felt restricted, despite all my trust in me, and my strength and my knowledge.

I hadn’t wanted to speed up my baby’s birth date or birth hour. I do think the pressure to give birth sooner – and the fact that she possibly did arrive a few hours sooner than she was ready – impacted the labour, which was harsher and more difficult – more work, more endurance, more surrender for me! – than the two I’d experienced before.

It’s also possible that the extra physical challenges that I’d had in earlier pregnancy, though dramatically corrected thanks to yoga, were still not a hundred percent resolved.

All in all, another lesson for me personally in facing unpredictability – even if I felt it was being foisted on me totally unnecessarily this time. Yay!

Colm thought of her name a couple of days before labour started and I loved it as soon as he said it out loud: I joke that maybe she couldn’t be born until we agreed a name for her! (Maybe?!)

These are the thoughts that dominate today as I look back.

I am grateful that I had the resilience and the strength for the birth in all of its rigours.

That’s tomorrow’s story though. This day last year, we were still in the zwischen. We were still gloriously waiting. 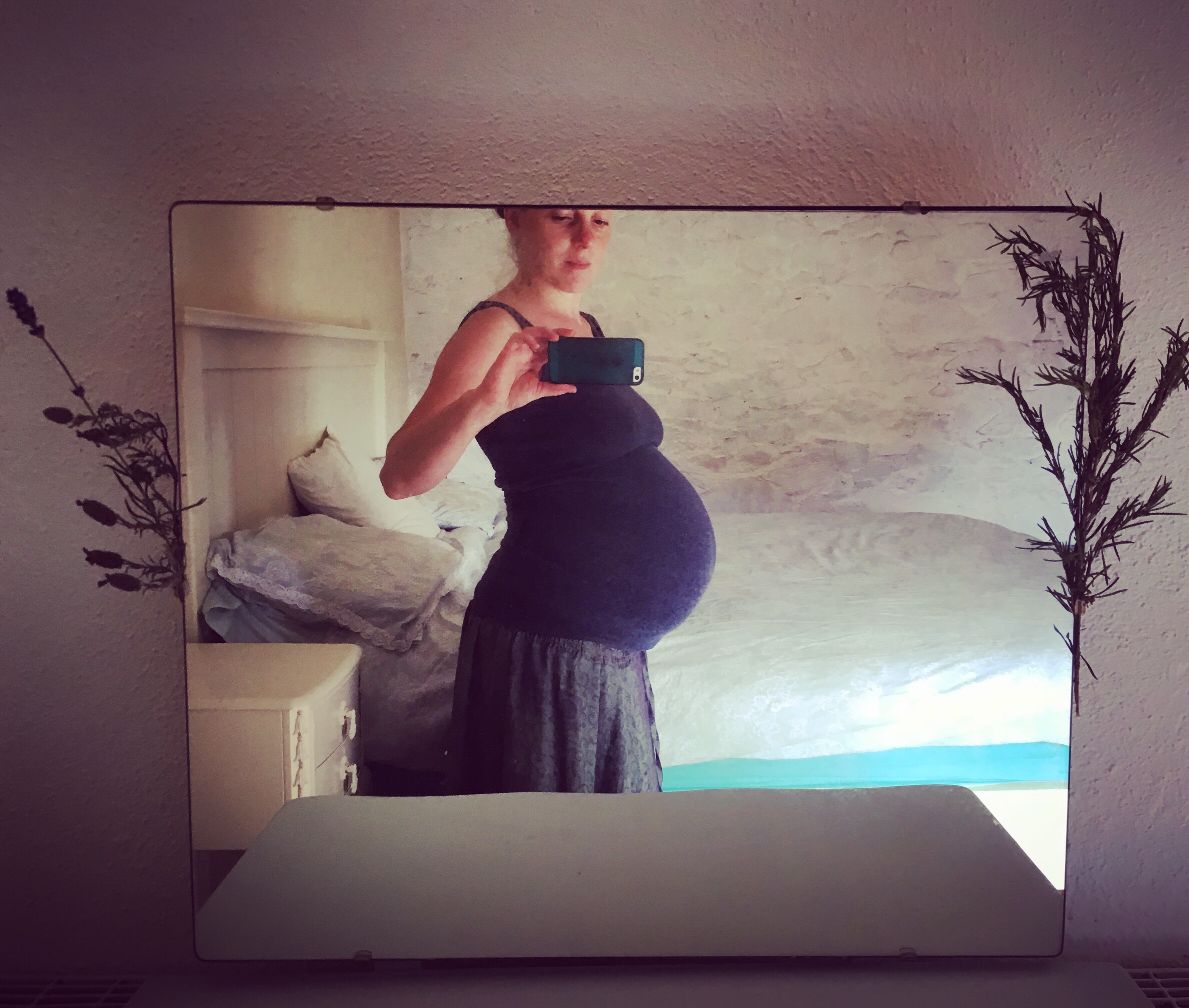 The Last Days of Pregnancy: A Place of In-Between

The 8th amendment; Its effects on continuing pregnancy

No feed. Create and publish a feed to display it.